By Andrew Andersen and George Partskhaladze

In the year 1918, Georgia restored her independence from Russia. This became possible as a result of World War I and disintegration of the Russian Empire due to its failure to withstand a tremendous pressure endorsed by the war effort. During its three years of independence, Georgia's moderate socialist leadership was rather successful in the establishment of a democracy-track society. However, the development of democratic processes in the First Republic faced a number of challenges that included involvement in military conflicts with Turkey, Armenia, as well as the "Reds" and the "Whites" of Southern Russia, economic blockade by Western powers, delay of international recognition, internal conflicts and subversive activities of local Bolsheviks encouraged by the Bolshevik regime in Moscow. 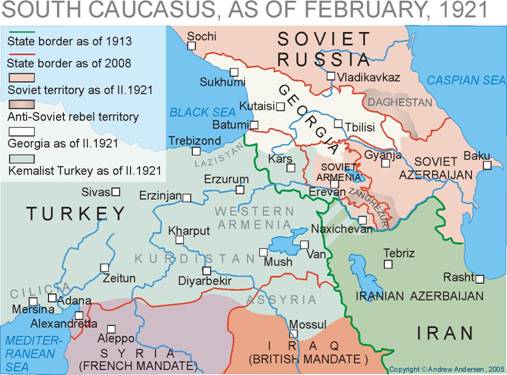 By the end of February, 1920, an alliance was formed between the Kemalist government of Turkey and the Soviet leadership of Russia. The new allies required a stable land-bridge between the two countries. In order to achieve that goal, the three independent states of the South Caucasus - namely Azerbaijan, Armenia and Georgia - were to be taken over and partitioned between Soviet Russia and Turkey. By 31.05.1920, Azerbaijan was invaded and Sovietized by Russia’s 11th Red Army. Four months later, Armenia was invaded by the Kemalist Army of Karabekir Pasa and partitioned between Turkey and Russia. The last independent country believing to be a bastion of the West squeezed between the Kemalists and the Soviets was Georgia, and it was to fall as well in order to finalize Soviet-Turkish project in the Caucasus.

This paper provides comprehensive coverage of the Soviet military campaign against Georgia that was launched on February 11th, 1921, in breach of a non-aggression treaty. It contains a detailed analysis of the major military operations of the campaign as well as a comparison of military might of both conflicting parties. This paper is one of the first attempts to cover the above-mentioned historical event which can be found especially interesting nowadays when Georgia and Russia are once again balancing at the brink of military conflict.